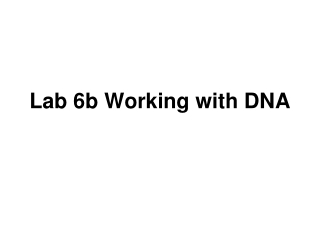 Working with DNA: Isolation and Fingerprinting - . funding and support received from…. today’s agenda:.

DNA BLAST Lab - . background . between 1990-2003, scientists working on an international research project known as the

DNA Extraction Lab - . step by step procedure that weakens the outer boundaries of a cell and lyses it to release the dna

DNA Extraction Lab - . dna is found in every cell in organisms to analyze dna scientists must break open the cells in

DNA Forensics Lab - Provide easy self sample collection kits, that can be used by a person to collect at ones home and

FUN WITH ENGLISH 6B - . unit7 penfriend. say something about me. you… your…. name card. lanley. english name:. age:.

DNA analysis lab techniques - . what are restriction enzymes and how do they cut