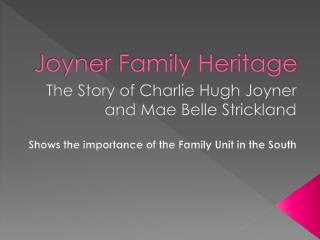 Joyner Family Heritage. The Story of Charlie Hugh Joyner and Mae Belle Strickland Shows the importance of the Family Unit in the South. Joyner Family. My Great- Great Grandparents. Jackie Joyner- Kersee - . known for: dominance in women's track and field. considered by many to be the best all-around

Artisanship and Your Family and Heritage Message 2 - . your family and work. what about work and the family … should