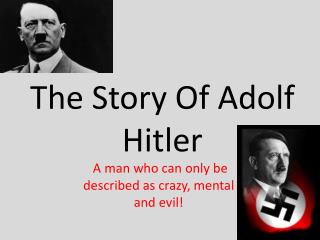 The Story Of Adolf Hitler

The Story Of Adolf Hitler. A man who can only be described as crazy, mental and evil!. Fact File of Hitler. Born on: 20 th April 1889 Mother: Klara Hitler was 23 years younger than her husband and the third wife of Alois .

The Story Of Adolf Hitler

The Diary of Anne Frank - . 1933- adolf hitler and the nazi party comes into power in germany. 1935- the nuremberg laws

Nazi Germany - . welcome back… how was the wave? what did you think of it? remember it is a true story?. review. what

Adolf Hitler From his birth to the Battle for Stalingrad - . by luke loeffler et249 power point assignment. early life.

Adolf Hitler - . by: alex, emily, emma, and heather. what role did the nazi’s play?. the nazi’s role was that they

Adolf Hitler Factfile - . hitler was born in a he wanted to be an he worked as a l often hitler was very poor so much so

ABCs of Adolf Hitler - . by cori krick. d is for

Hitler and His Views - . 24.3. hitler and his views. adolf hitler’s ideas were based on racism and german nationalism.

Hitler the Orator - . http://www.youtube.com/watch?v=syi_b8a5iv4. a public speaker, especially one of great

Adolf Hitler - . and how the nazi’s rose to power. teaching point. today we will investigate hitler through text,