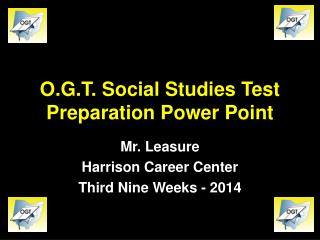 Preparing for the Social Studies 11 Provincial Exam - . know what you are facing. the exam has two parts: selected

Integrating Social Studies - . ms. perez. bell ringer. what are some questions that our pre-schoolers ask that have to do

Test-taking Strategies - . reading hspe. read carefully and mark what is being asked!. use circles, underlines, and other

Third Grade Social Studies Where do I begin? - . teaching unit 1 and moving forward with the next units marlo mong august

Test Taking - . chapter 9. strategies for test preparation. what doesn’t work in preparing for tests?. what has not