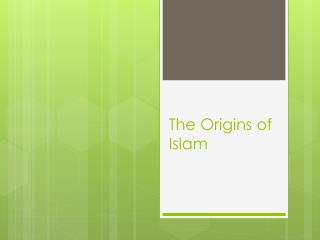 The Origins of Islam . Muhammad and Mecca. Muhammad was born in Mecca around 570 Became a successful trader Mecca: trading and religious center Kaaba : cube shaped building in Mecca that housed idols of local dieties . People would embark on pilgrimages to Mecca to worship at the Kaaba Origins of Islam - . the prophet muhammad was an arab born in 570 ce, in mecca , which is in present-day saudi arabia. he

Islam Research Presentation - . by: sarah thornton. islam beliefs/origins. the qur’an is a sacred book made up of the

The Rise and Spread of Islam - . why important???. islam spread quickly to become one of the world’s most popular

a. Explain the origins of Islam and the growth of the Islamic Empire. - Sswh5 the student will trace the origins and

Islam - . “never expect things to happen, struggle and make them happen. never expect yourself to be given a good