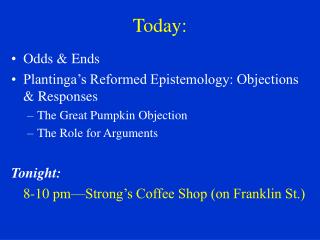 Topics for Today - . back to pvc and addition polymers stiff or flexible? plasticizers. topics for today. orientation of

Lighting the Candle - . god’s light is with us. notices. notices: welcome, especially to visitors who have come today.

Today we will try to answer these questions… - . what is (and what isn’t) social media (some )? how can we use some

Outline for Today - . objectives: to introduce the critical section problem . to learn how to reason about the

Topics for Today - . from fats to soap!. topics for today. what is a soap? why do soaps clean? what is dirt? what is hard

Today - . apple maps labeling in gis labeling in adobe illustrator. what is broken?. not the face of the map… the

Co-Segmentation - . presented by : murad tukan. introduction. today there is a massive attempt to exclude the same object