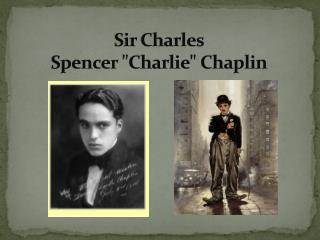 Sir Charles Spencer  " Charlie "  Chaplin. CHILDHOOD. Charles Spencer Chaplin was born on 16 April 1889 to Hannah Chaplin (née Hill) and Charles Chaplin At the time of his birth, Chaplin's parents were both entertainers in the music hall  tradition. CHILDHOOD.

The amazing adventures of Stewie - . charlie pen. stewie griffin . ronnie hipp. were is ronnie and charlie???? . i

1:Language &amp; literature - . roald dahl. question 1. what was &quot;charlie and the chocolate

Charlie and the Chocolate Factory - . activities. next. writing a descriptive paragraph of a room in the chocolate