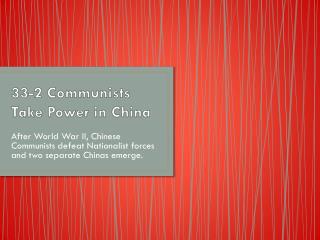 Conflict in China: The Chinese Civil War and More - . questions to ponder…. what problems did the new republic of china

Communist China - . ss7h3d describe the impact of communism in china in terms of mao zedong, the great leap forward, the

To what extent was Sun Yat-sen responsible for the 1911 Revolution? - . l/o – to evaluate the claim that sun yat

Communist China - . china’s last emperor. 1912 – puyi , the last emperor of china, stepped down from his throne. this

MAO’S RED CHINA - . china under communist rule the communist state and years of great change. problems caused by the