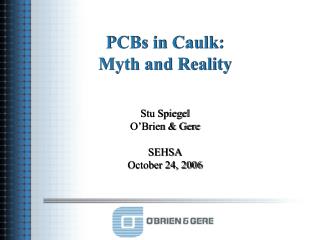 PCBs in Caulk: Myth and Reality

PCBs in Caulk: Myth and Reality

How to use the Alabama Rain Barrel Project to reach your community with the - Non-point source message. sponsors.

POLYCHLORINATED BIPHENYLS - . prepared by: pcbs - group. our website. content. what are pcbs? how pcbs get into living

Where are Russian PCBs

Polychlorinated Biphenyls (PCBs) - . biphenyl: pcbs have cl substituents at any site on the biphenyl structure → 209

RAPE MYTHS AND BELIEFS - . what is a myth?. myths present a reality that seems plausable. however, the very concept myth