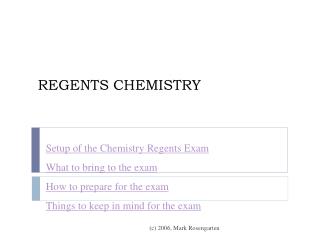 Higher Chemistry Unit 2 - . nature’s chemistry. what you should know…. that molecular structure and physical

Regents Questions For Global 1 100 Questions - . mr. c. dennison cardinal hayes hs. during which period did the

Introduction to Bioorganic Chemistry - . chemistry of biomolecules. a biomolecule is a chemical compound that naturally