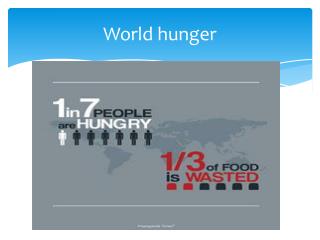 World hunger. Shocking Facts. In 2010 an estimated 7.6 million children (more than 20,000 a day) died from hunger While hunger exists worldwide, 62.4% exists in Asia/South pacific Almost 1 in 15 children die from hunger in developing countries WORLD HUNGER - . 1. how many children does the united nations estimate die every day from causes related to hunger and

World Hunger and Poverty - . by: kelsey, ryan, and christina. what qualifies as malnutrition or poverty?. malnutrition-

HUNGER IN THE WORLD - . a world condemned to a life of poverty-famine and suffering. there are 800 mil people, all over

The World Hunger Challenge - . important definitions. world hunger : malnutrition that is caused by conflict and/or

World Hunger CGW-4U - . hunger scenario. remember a time when you have been hungry missed a meal, delayed dinner or sick