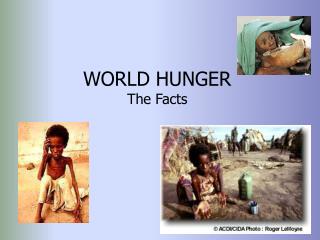 WORLD HUNGER - . 1. how many children does the united nations estimate die every day from causes related to hunger and

HUNGER IN THE WORLD - . a world condemned to a life of poverty-famine and suffering. there are 800 mil people, all over

The World Hunger Challenge - Important definitions. world hunger: malnutrition that is caused by conflict and/or harmful

The World Hunger Challenge - . important definitions. world hunger : malnutrition that is caused by conflict and/or

Hunger facts in africa 26% - . this is how poor people get food. due to eating garbage food he/she is sick. people crying