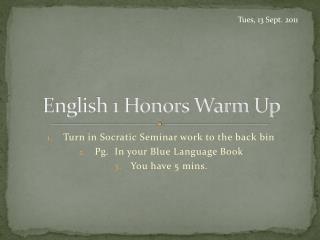 Tues, 13 Sept. 2011. English 1 Honors Warm Up. Turn in Socratic Seminar work to the back bin Pg. In your Blue Language Book You have 5 mins. Grammar Notes – Pronoun Antecedent Agreement.

Theme for English B - . short story terms. catcher in the rye. vocabulary. sat warm-up. potpourri. theme for english b.

Warm Up - . work silently. raise hand to ask ms. hughes anything. get a pink packet from the side shelves. these are our

We love English! - . quiz. are you good at english?. task №1 . listen and finish the sentence. you don’t go to school

Warm-Up (IN) 1/4/12 - Warm ups are done individually and quietly in your desk. warm up time is usually 5-7 minutes and

Warm-up - Harry s. truman’s use of the a-bomb to end the war with japan has been studied for many years. explain why

Honors Biology: Chapter 4 - . a tour of the cell. the art of looking at cells artists have long found inspiration in the