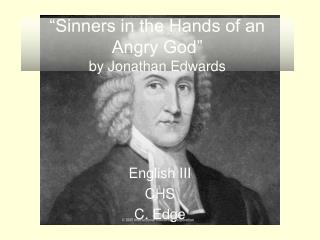 “Sinners in the Hands of an Angry God” by Jonathan Edwards

“Sinners in the Hands of an Angry God” by Jonathan Edwards. English III CHS C. Edge. Focus Activity, p. 100. Think about a time you tried to change someone’s mind. Did you use a gentle approach, scare tactics, or something in between?

“Sinners in the Hands of an Angry God” by Jonathan Edwards The Angry Vase - . the vase was self-sufficient because it had been broken and its pieces had been glued together, so the

able to use both hands equally well - . ambidextrous. ridicule, mock, jeer. gibe. bereaved; made unhappy because of loss.

The Holy Spirit - . lesson 4 miracles have ceased. the holy spirit. he is god inspiration, revelation and confirmation of

Insurer Reorganization and Restructuring in the US and UK - . geoffrey etherington - partner, new york edwards angell