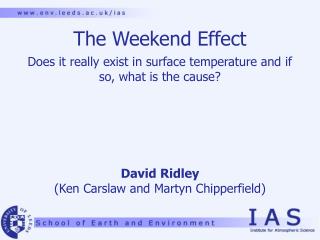 Anthropogenic Aerosol – A Cause Of The Weekend Effect? - . motivation for research. a significant weekly cycle has been

WELCOME BACK FROM THE LONG WEEKEND! - . bell ringer: grab a book from the shelf and read! be ready to share something you

My last weekend - . last saturday, i got up early and i had a small breakfast because i went to work. then i cooked lunch

FNCE 4070: FINANCIAL MARKETS AND INSTITUTIONS Lecture 3: The Role of Expectations in Financial Markets - . how

Effect of vaccines - Immunological bioinformatics or finding the needle in the haystack morten nielsen mniel@cbs.dtu.dk.