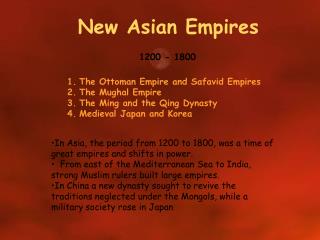 New Asian Empires. 1200 - 1800. The Ottoman Empire and Safavid Empires The Mughal Empire The Ming and the Qing Dynasty Medieval Japan and Korea. In Asia, the period from 1200 to 1800, was a time of great empires and shifts in power.

Poverty Among Massachusetts Asian Americans - . mining the u.s. census and a couple of other things. what’s “asian

Assignment – Empires of Asia Blog - . your assignment for today: create a 3-entry blog that describes three days in the

Muslim Empires - . mr. white’s world history. objectives. after we have studied this section, we should be able to:

Islamic Empires - . review. the sasanid empire was centered in the area that is present-day a) lebanon. b) egypt.

Gunpowder Empires - . from 1400-1800 certain countries/empires were stronger than others as a result of gunpowder. states

The Best Empires in Mesopotamia - . by aadhya chilakala. model of ancient babylonian temple or ziggurat. photograph.

The Classical Empires - Which society creates the largest empire in world history?. the classical empires . unit 2: