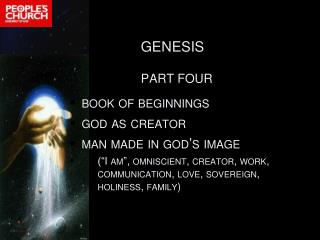 Questions About The Sabbath? - . if every man from adam to moses kept the sabbath, why is the hebrew word for weekly

Genesis Chapter Nineteen - . bible bowl 2013. genesis 19:1.  who came to sodom at even, after abraham had asked god to

Genesis - . jacob’s trouble. the religious mentality: what is god trying to do? i don’t know, i just want my bills

☺☻☻☺ - . agri-bio linguistics god’s signature on his creation. archaeology *. the study of b e re’shiyt *the

Creation and the Bible: An Exegesis of Genesis - . views on creation. in evangelical christianity, there are two primary

GENESIS - . part five book of beginnings god as creator man made in god’s image eden temptationsin the fall and

Does Archaeology Verify The Bible? - . dr. heinz lycklama heinz@osta.com www.osta.com/apologetics. overview. what is