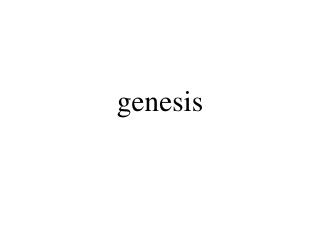 Genesis - . bernard beckett. select a topic to revise . theme question: what does it mean to be human? character: adam

GENESIS - . the 1 st book in the bible written by …moses. genesis. begins it all …….. and appropriately it is at

Genesis - . jacob’s trouble. the religious mentality: what is god trying to do? i don’t know, i just want my bills