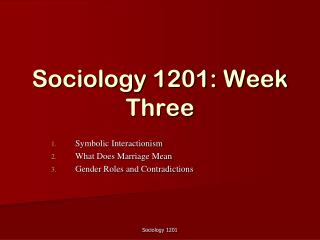 Introduction to Sociology - . what is sociology?. perrin definition: sociology is the scientific study of human societies

The Sociology of Celebrity - . popular culture fall 2013 robert wonser. what are celebrities?. celebrity is the site of a

Sociology Terms - . unit 1. chapter one. an invitation to sociology. perspective. perspective is one’s point of view.

Introduction to Sociology - . chapter 1. the benefits of sociology. “using the sociological perspective makes us wiser,

A Contemporary Introduction to Sociology - . culture and society in transition by jeffrey c. alexander and kenneth

AN INTRODUCTION TO SOCIOLOGY - . sociology as a field of study how sociology relates to others fields of study

Comparison of Online Social Relations in terms of Volume vs. Interaction: A Case Study of Cyworld - . hyunwoo chun+