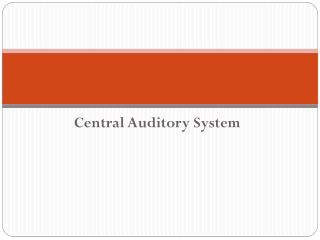 Central Auditory System. I. Tonotopic organization (i.e . frequency map in the central auditory system) ​- Sound is represented tonotopically in the cochlea, which results in tonotopy in the auditory nerve fibers. .

Central Auditory Processing Disorders (CAPD) - . walk a mile in their shoes. can you figure out these familiar sayings?

Auditory monitoring for preservation of the function of the auditory nerve - . recording of auditory evoked potentials in Cranial nerves - . provide motor and sensory innervation for the head and neck damage of motor neurons results in cranial