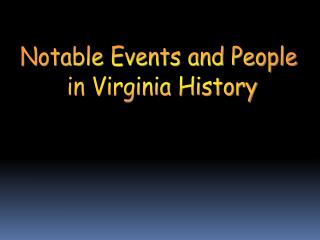 Notable Events and People in Virginia History. Christopher Columbus. Columbus spent some of his early years at his fathers trade. He weaved and later became a sailor on the Mediterranean ship. He stole from the rich and gave to the poor. He sailed on the Mayflower ship to go to England.

Group #2 - Overview of the history of belize, central american and the caribbean(barbados) native people colonial current