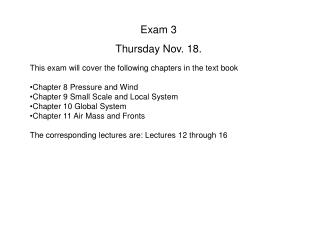 Exam 3 Thursday Nov. 18. . This exam will cover the following chapters in the text book Chapter 8 Pressure and Wind Chapter 9 Small Scale and Local System Chapter 10 Global System Chapter 11 Air Mass and Fronts The corresponding lectures are: Lectures 12 through 16. To prepare:

From Last Time… - . energy and power in an em wave. polarization of an em wave: oscillation plane of e-field. exam 3 is

Biology 1010 Chapter 20 - . bryophytes. bryophytes. what are they?? where are they found?? what is their evolutionary

Thursday, Nov. 29 - . get out your spiral and put your binder on the floor 2. update your table of contents if you did