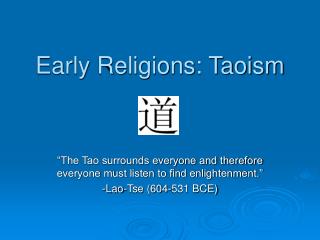 Early Religions: Taoism. “The Tao surrounds everyone and therefore everyone must listen to find enlightenment.” -Lao-Tse (604-531 BCE). Practices of Taoism. ultimate goal is to become one with Tao seek answers to life’s problems through inner meditation and outer observation Religion - Major foci . to describe the distribution of major religions to explain variations in diffusion of religions

Comparative world religions - . vocabulary • 2019. monotheism. the doctrine or belief of the existence of only one god.

The Rise of Christianity - . objectives: what were the main causes for the spread of christianity in the roman world?

RELIGIONS FROM THE MIDDLE EAST - . judaism. islam. christianity. all three religions believe in…. one god – the god

The Five Major Religions - . restrictions on religion by the governments of world countries. christianity judaism islam

Early Religions: - Objective: swbat compare and contrast the three early religions. e.q. – what are the similarities