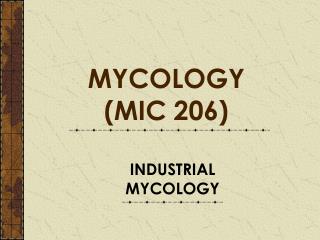 MYCOLOGY - . mycology. the fungi are eukaryotic organisms growing as a mass of branching, interlacing filaments known as

Mycology - . general properties of fungi: fungi are a diverse group of saprophytic and parasitic eukaryotic organisms

Mycology : - . the study of fungi. characteristics. eukaryotic (have a nucleus) heterotrophs (most are decomposers) some

mycology - . history…. 150 years back augustino bassi in italy established that a fungus beauveria bassiana was cause

Mycology - . conception. the fungi are nonphotosynthetic protist growing as a mass of branching interlacing filament.