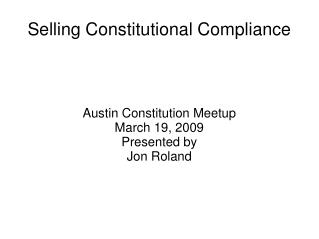 CONSTITUTIONAL CHANGE BY OTHER MEANS - . american government chapter 3-3. non-wording changes. some changes to the

The Science of Success - . market based management. but first, a few words about the austrians. the use of knowledge in

The Constitutional Union - . america’s “experiment” in self-government. the collapse of the articles: lessons of