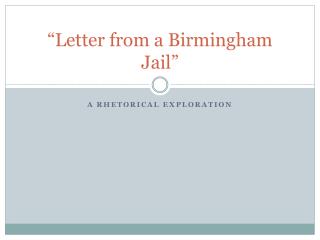 “Letter from a Birmingham Jail” “Letter from a Birmingham Jail”. A Rhetorical Exploration. By the end of this lesson, you will be able to:. Define the five canons of rhetoric; Identify King’s appeals to ethos, pathos, and logos; Discuss the significance of syllogism and enthymeme in a logical argument;

“Letter from a Birmingham Jail” Some Of The Best Ways To Get Started With Video Marketing - Imsbranding.com provides wide range of web development Birmingham man and van - Move swift of uk is a moving company which is located in birmingham but work for whole uk. they

Common Core Standards ELA - . november 2013. where is the common core going to take us?. what are we leaving behind?.

Equality in America - . hello folks i am giving your tour today, my name is anthony. our first stop will be to the

Fabulous Friday, September 11 - . “two ways of seeing a river” chpt. 1 of narrative of the life of frederick douglass

Good Morning Chickadees! - . do now: are there any laws or rules that you think are morally unjust or unfair? would you

Letter from a Birmingham Jail - . king lesson. read and annotate. read, recognize and react read (follow along as i read

Notes on Dr. Martin Luther King, Jr., “Letter from Birmingham Jail” (1963) - . some preliminary questions. what was

Bexar County Jail Symposium - United states bureau of statistics (2006). 1 in 31 americans is in jail or prison, on