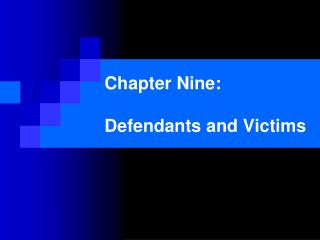 Erika-Irene Daes on Colonialism - . common features of repression around the world: utter denial of the victims’

New Rights in 2015 for Victims of Crime in Europe! “T ogether for the Victims ” - . good morning hungary david

Victim’s Rights - . “victims are often the forgotten component in the analysis of crime”. by nikolina vicoroski

Victimology - . and anthropology and race. victimology. until recently, victims were not studied passive recipients of

Trafficking victims in SEE – what we know, what we need to know - . rebecca surtees nexus institute to combat human

Understanding the Defendants’ Takeover of AIG - . in support of plaintiff’s motion to compel defendant geithner’s

BULLYING - . lisa serrao. myth or fact ?. bullying is just a part of growing up. the effects of bullying on victims are