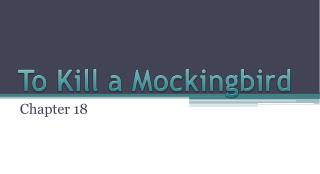 To Kill a Mockingbird. Chapter 18. Judge Taylor. He would not allow Atticus to harm Mayella . Atticus was not sassing Mayella , he was being a gentleman. Put a cigar in his mouth after recess and spat the excess into a spittoon . To Kill A Mockingbird Study Guide - . harper lee. chapter 1. 1. who is the narrator? scout 2. who is simon finch and what

California Interscholastic Federation presents - . steroids and supplements – what we all need to know what you don’t

Reflective Auto Detailing and Pearl Coatings for the Kill - Please contact us today for more information, prices and a

Lloyd: What do you think the chances are of a guy like you and a girl like me ... ending up together? … What are my

Elements of Comedy - With a focus on satire caveat: the best way to kill a joke is to analyze it. comedy is the hardest

Booby Traps - . what are some examples of the sort of booby traps, used by the viet minh in the vietnam war?. what is a

To Kill A Mockingbird - . to kill a mockingbird?. &quot;mockingbirds don't do one thing but make music for us to

Predators - . predators are animals that kill and eat other animals. gestation. period of pregnancy delay gestation

Global Tobacco: Will Legislation Kill the Industry? - . july 2009. introduction legislation: what restrictions are there?

To Kill A Mockingbird Study Guide - . harper lee. chapter 1. 1. who is the narrator? scout 2. who is simon finch and what

Antimicrobials - . pharmacology. basic terminology. an antimicrobial is a chemical substance that has the capacity, in