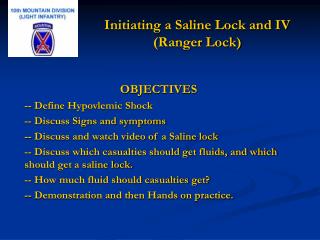 Initiating a Saline Lock and Intravenous Infusion - . hypovolemic shock. caused by a decrease in the volume of blood in

Secure A Lock - Secure-a-lock is also known as a compact lock restrict or and it is designed to prevent lock bumping,

Lock Performance - . by wesley w. wilson university of oregon and iwr. purpose of study. the inland waterway consists of