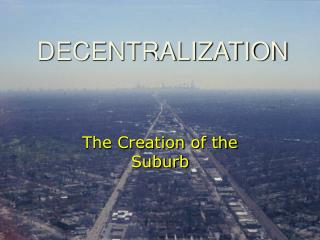 DECENTRALIZATION. The Creation of the Suburb. The Street as Public Space … the standard up to the mid 20 th c. Riverside, Illinois. designed by Frederick Law Olmsted, 1869 a prototype suburb 9 mi. from Chicago reached by streetcar Why? Cities at that time were smoky, dirty, places DECENTRALIZATION - . the spread of power away from the center to local branches or governments. according to henry fayol

Decentralization in LAC - . overview of operations and lessons from experience kathrin a. plangemann may 8, 2006 with

Centralization vs Decentralization - . county general services association april 3, 4 and 5, 2013. agenda. why me?. look