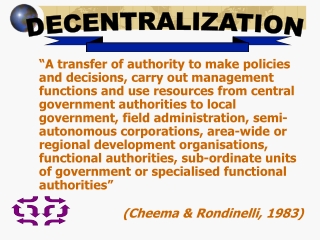 Costs and Benefits of Decentralization - . sati workshop on tax policy and administration, university of pretoria, june

DECENTRALIZATION - . the creation of the suburb. the street as public space … the standard up to the mid 20 th c.

Decentralized Organizations, Transfer Pricing, and Measures of Profitability - . 14. decentralization versus