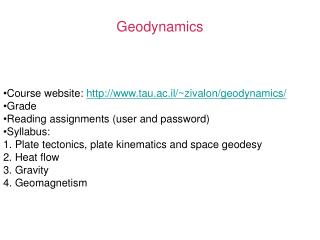 Geodynamics - . geodynamics is what we often call “modelling”. we use what we know about the physics of how materials

Lecture 18: Chemical Geodynamics, or Mantle Blobology - . questions what can geochemistry tell us about the deep interior

Reinhard Böhm Central Institute for Meteorology and Geodynamics Vienna, Austria - Bridging the gap from indirect to