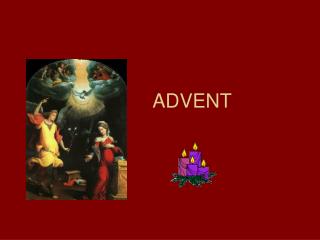 ADVENT. And in the sixth month the angel Gabriel was sent from God into the city of Galilee called Nazareth, to a virgin espoused to a man whose name was Joseph, of the house of David. And the virgin's name was Mary.

The Mystery of the Incarnation - . fred bischoff. introduction. introductory thoughts context of advent movement and

FIRST Sunday OF advent 13th October, 2013 - . the service. the service – this form of the holy communion service is

Communication - . chapter 2. ipc. inter-process communication is the heart of all dss. processes on different machines.

The Liturgical Year - Advent - . “in christianity time has a fundamental importance.” (on the coming of the third

Advent Calendar Quiz - Answer the questions in small groups. then choose a question to answer. if you answer correctly,