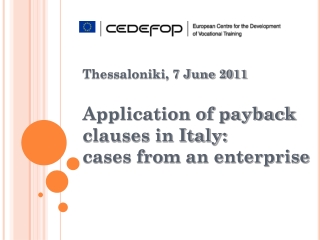 Thessaloniki, 7 June 2011 Application of payback clauses in Italy: cases from an enterprise Thessaloniki, 7 June 2011 Application of payback clauses in Italy: cases from an enterprise

ARISTOTLE UNIVERSITY OF THESSALONIKI - . aristotle university of thessaloniki. brief history of the university the

Implementation and Effectiveness of Training Leave in Greece - . cedefop ’ s workshop on: “training leave and payback

CLAUSES - . main and subordinate. clauses. a clause is a group of words that has a subject and a verb and is used as part

Italy - . by: cory coulter. the flag of italy. type of gov. italy has been a democratic republic since june 2, 1946, when

What is an Enterprise Wide Application? - . introduction and principles. based on chapter 1 in adam, frederic and sammon,