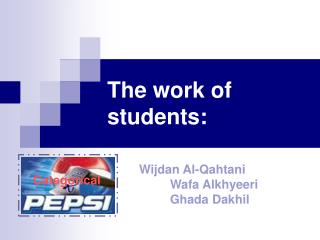 The work of students:

The work of students:. Wijdan Al-Qahtani          Wafa Alkhyeeri          Ghada Dakhil. Categorical. Supervision of Professor. Sanaa Al-Adawi. Soft drinks And energy drinks. What is known about damage to soft drinks ?. First: A box containing one of

The work of students:

Never Work Harder Than Your Students

Strategies for Successful Student Teaching - . chapter 6. how does planning relate to effective teaching?. the ability

COLLABORATING FOR STUDENT SUCCESS: The Professional Learning Community - . collaborating where you work. the teachers and

Analyzing and Examining Student Work - . day 2. welcome back. in your group process… you practiced analyzing student

Co-Teaching as Best Practice in Student Teaching - . college of education and professional studies. co-teaching. …is

Professional Development In The Age Of Student Achievement Based upon the work of Thomas R. Guskey - . peter bonaccorsi,