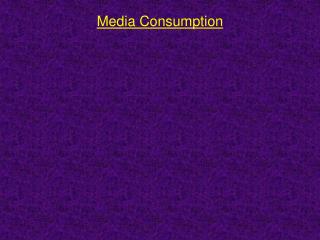 Consumption and Production of Media Communication - . today’s topic: advertising. the power of advertisement. why learn

Motivation and reward for media consumption - . uses and gratifications theory. why?. why do people spend so much time

The Global Media, Communications and Cultures of Consumption - . what this lecture is essentially concerned with is the

CONSUMPTION - Theories of. consumption. sustainability. and housing. complex house picture. frequently and not so