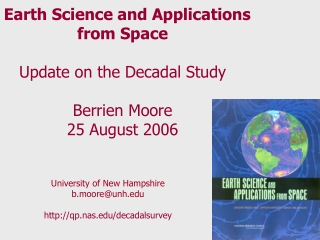 Earth Science and Applications from Space Update on the Decadal Study Berrien Moore 25 August 2006. University of New Hampshire b.moore@unh.edu http://qp.nas.edu/decadalsurvey. Decadal Survey: What is it?. Towards the Inaugural Australian Decadal Plan for Space Science: 2007-2016 - . what is space science? draft vision

The Case for a Data Decadal Survey - . a community-driven initiative to harmonize data practices, research priorities and

IV. Section 3 Using Space Science on Earth - . a. the challenges of space. vacuum-empty of all matter space craft must be

Earth/Space: Beginning with Science - . what are the different “spheres” of the earth?. the spheres of the earth

Using Space Science on Earth - . lesson 4, chapter 2. the challenges of space. conditions in space that differ from those

Earth in Space - . astronomy; science explorer, prentice hall. why does the earth have day and night?. astronomy : the

Earth and Space Science - . (7)  earth in space and time. the student knows that scientific dating methods of fossils

Earth from space - . time lapse sequences of photographs taken with a special low-light 4k-camera by the crew of

Why go into space when we have so many problems here on Earth? - Applications on earth of technology needed for space