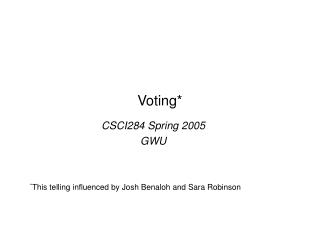 Voting*. CSCI284 Spring 2005 GWU. * This telling influenced by Josh Benaloh and Sara Robinson. Goals of an election. Integrity : each vote is correctly counted Anonymity : a vote cannot be connected to a voter (without voter complicity)

The Importance of Voting - . the right to vote. history of suffrage in u.s. (who could vote at the time and how did

Voting and YOUth! - Youth-to-youth training. voting and youth!. a presentation by the national youth leadership network.

The Voters - . history of voting rights. the founding fathers let the states set qualifications for voting. only white

Why Vote? - . turnout. who votes? why do people vote? why don’t people vote? how can turnout be increased? would

Voting and elections - . step 1. have to be registered—2 weeks before increase turnout? ease registration, voting?

Voting and social choice - . looking at a problem from the designers point of view. voting over alternatives. voting rule

Representation, Elections and Voting - . chapter 12. do you think elections are important? why, why not? what do

Fighting for Voting Rights - . essential question: what methods did civil rights workers use to gain voting rights for