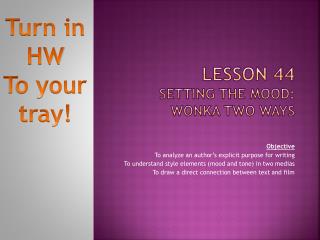 Turn in HW To your tray!. Lesson 44 Setting the Mood: Wonka Two Ways. Objective To analyze an author’s explicit purpose for writing To understand style elements (mood and tone) in two medias To draw a direct connection between text and film. Terms to Know. Mood and Tone - . tone and mood are literary elements integrated into literary works, but can also be included into any

What is Willy Wonka famous for? - . can you remember any of the imaginative technologies willy wonka created?. who worked

Setting up Camera Views Lesson - . setting camera views using objects, based on a lesson by bella. adventures in alice

Setting - . as mood &amp; symbol. mood = atmosphere. versatile writer’s technique “…when we speak of the of the

Setting and Mood - . the ap vertical teams guide for english. setting (write in your interactive notes). creates the

SETTING - . how does it add to the meaning?. setting. setting is essential to the understanding of a work of fiction.

Plot, Setting, and Mood - . setting. setting – the time and place of the story. 2 ways that authors create setting…

What is Willy Wonka famous for? - . can you remember any of the imaginative technologies willy wonka created?. who worked

Short Story Unit - . terms. setting :. the setting is the time and place in which the events of a story occur. setting

Setting and Mood - . key point #1: setting is the physical location and time in which a story takes place. . to identify

Setting - . the setting of a story is the time and place of the action. setting. questions to ask what evidence in the