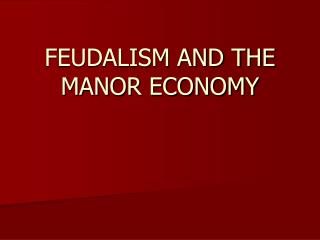 FEUDALISM AND THE MANOR ECONOMY. Feudalism. With the Vikings, Muslims, and Magyars on the lose the people needed protection on the local level. Feudalism provides that protection. Feudalism also provides a cultural center for the people – the manor. How does it work. The Global Economy Welcome: http://youtu.be/jvXRTUqdpB4 - . the global economy macroeconomic data. gapminder. what do you

THE GROWING IMPORTANCE OF HR IN THE NEW KNOWLEDGE ECONOMY - . abstract: why growing importance of hr ?. why growing

The Global Economy Business Cycle Indicators - . investors’ guide to business cycles . ?? add something like this