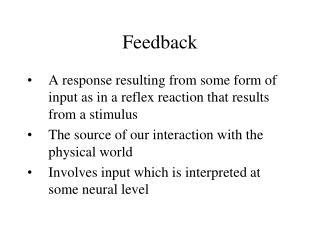 Feedback. A response resulting from some form of input as in a reflex reaction that results from a stimulus The source of our interaction with the physical world Involves input which is interpreted at some neural level. Sources of Input. FEEDBACK! WHAT’S “FEEDBACK”? - . did you know that. feedback you receive is not just confined to coursework and

Feedback - . what opportunities does progress testing offer for feedback? what do you think? should fit within learning

Feedback - . essential questions. how do we provide meaningful feedback? how do we respond to feedback in the spirit of

Assessment for learning: the benefits of generating feedback David Nicol - Professor of higher education centre for

Chapter 4: Basic Properties of Feedback - . chapter overview. perspective on properties of feedback. control of a dynamic