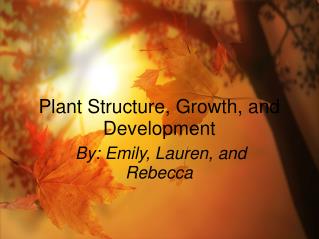 Plant Structure, Growth, and Development. By: Emily, Lauren, and Rebecca. Plasticity: where a plant is able to mold itself due its environment Morphology : is the plants external form Tissues: a group of cell with common function and structure Plant Structure and Growth - . chapter 35. objectives list the differences between dicotyledons and monocotyledons

Plant Growth and Structure - . chapters 24 and 27. growth and development of embryos embryo develops from the zygote

Plant Structure and Growth - . topic 9.1. to review. study the chart on pg 239 for your different types of plants the