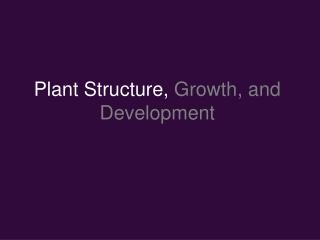 25-1 Hormones and Plant Growth - . essential question how do hormones affect plant growth and development?. patterns of

Plant Growth and Structure - . chapters 24 and 27. growth and development of embryos embryo develops from the zygote

Plant Growth - . before we begin. what are the basic parts of a plant?. plant structure. roots the roots are used to

Plant Structure, Growth, and Development - . by: emily, lauren, and rebecca. plasticity: where a plant is able to mold

Plant Physiology - . what happens inside the plant!. plant taxonomy. monocots dicots. the three areas we will look at. 1.

Plant Growth and Development - . flowering plants are either monocots or dicots. cotyledons provide nutrition for the

Plant Structure and Growth - . topic 9.1. to review. study the chart on pg 239 for your different types of plants the

PLANT GROWTH &amp; DEVELOPMENT - . by: lori mitchell. to know a plant, grow a plant. plant a seed in the mind and

Growth and Development - . which of the following situations constitute growth. the increase in size of the protoplasm of