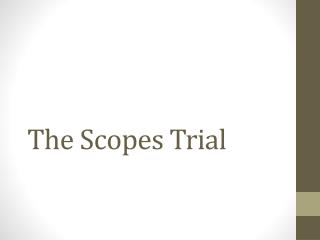 The Scopes Trial. What was the Scopes Trial?. It was otherwise known as the Monkey Trial. It settled the debate of “ should evolution be taught in public schools. ” To see if evolution would be the best idea to teach kids, they decided to put a teacher on trial who taught evolution. .

Overview - . paper #1 - an efficacy trial of word generation: results from the first year of a randomized

A Randomized Trial of Supplemental Parenteral Nutrition in Under and Over Weight Critically Ill Patients : The TOP UP