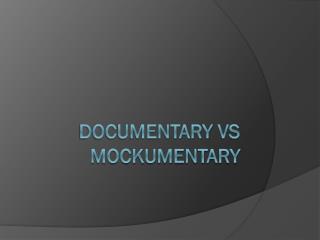 Documentary vs Mockumentary.  “ Mockumentary ,” as the “mock” prefix implies, is the mischievous twin of the documentary.

Documentary film - . minds on the power of the camera think positive today, you will be able to recognize the

Techniques of Propaganda - . aesthetics, emotion, and argument. making a wildlife documentary – a broken

Introduction to the Bible - . the structure of the bible. ‘babylonian genesis’ compared to gen 1. gen 1 compared to

ADVENTURES IN 65MM (some of) the trials and tribulations of 65mm preservation &amp; restoration - Presented by

Can We Trust Our Bibles? - . a review and critique of a &amp; e’s documentary, who wrote the bible?. introduction.