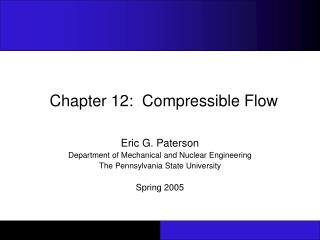 Chapter 8: Flow in Pipes - . me 331 – fluid dynamics spring 2008. objectives. have a deeper understanding of laminar

Control Flow - . chapter 6. control flow. skipping most of this chapter in class skim it when reading we’ll just hit on

where the * denotes a dimensional quantity. - We will apply several numerical methods to find a steady state solution of