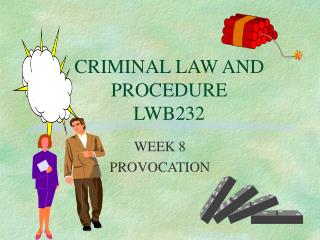 CRIMINAL LAW AND PROCEDURE LWB232. WEEK 8 PROVOCATION. Provocation: Rationales for the Excuse. Provocation developed: as a concession to human frailty, with some "contributory fault" on the part of the victim;

Parliamentary Procedure - . how can i survive a formal meeting? note: objectives are rearranged from ladoe for ease of

Welcome to Criminal Law and Procedure - . what are we doing?. the people of the state of new york v mike delta and alfred

Criminal Justice Ethics - . criminal justice ethics. why worry about whether the cj system is moral? what can we learn

CRIMINAL LAW AND PROCEDURE LWB232 - . week 10 self defence. self-defence. cf fighting: if a person wants to fight then