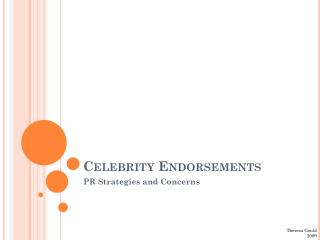 Nike’s Motivational Campaigns - . by: ian bohince and sam wright. just do it. nike struggled to compete against winning

Celebrity Interview - . number off spin for number person stands as the celebrity others write 1 question per post-it ( 1

CHAPTER 4 Marketing Products and Services Through Sports - . endorsements. wanna be like mike?. e ndorsement. a

What is a brand? - . a brand is a name, term, sign, symbol or design or a combination of them, intended to identify the

Consumer Health - . written response warm up. on a half sheet of paper: what products have you seen endorsed by a

Celebrity Marketing - . valuable dead or alive. marketing celebrities is big business. the “cult of celebrity” has

Celebrity Breakups 2017 - Celebrity couples who have called it quits this