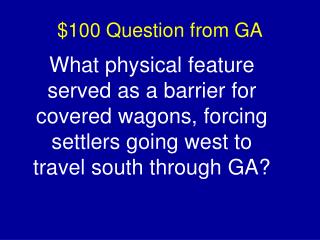 Question for 100 - . what is the difference between ahadith and sunnah of holy prophet (saw)?. answer for 100. ahadith :

Question 1, For $100 - . this group of people desired to leave england in order to practice religious freedom. a.

From Objective to Essential Question - . promoting higher-order thinking and retention. what are essential questions?.