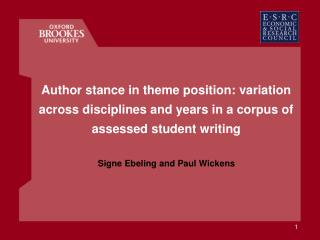 Learning about Taxes - . 2013 edition. our main character, paul , is a 17-year-old high school student who spends most of

Journal - . at the end of the first chapter, paul says, “youth! we are none of us more than twenty years old. but

The Sunshine Vitamin in the 21st Century - Bone Benefits and Beyond? - . prof peter r ebeling department of medicine